What is Timeslip? - An Introduction

“Timeslip” was originally conceived by Ruth Boswell who in 1970 was working in ATV’s script department. As part of its commitment to provide original programming for the ITV network, ATV had to supply a fixed amount of TV programmes for children. The company’s script department were asked to come up with new ideas that could be the basis for an ongoing drama series. Ruth’s was deemed the best. 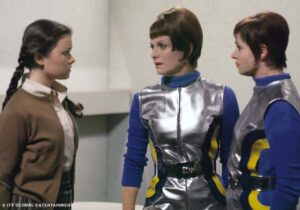 Ruth had been inspired by a book she had read many years ago entitled “An Experiment with Time” by J. W. Dunne. It contains a number of theories about how time travel could be realised and provided a unique alternative to the more traditional ideas presented in TV shows like Doctor Who. These ideas were passed on to writer Bruce Stewart who, along with Ruth, fleshed out the story.

It was originally envisaged that the series would be a six-part serial and deal with two teenagers and their adventures as they travelled back in time to a secret World War Two military base. Early titles for the serial included “The Phase Children” and “Chronos” before the snappier and more SF sounding “Timeslip” was eventually decided on.

Producer John Cooper cast two virtual unknowns for the lead roles of the children, Simon Randall and Liz Skinner. They were Spencer Banks and Cheryl Burfield. Although Cheryl was initially thought to be too old for the role, she impressed the production team so much that they amended the scripts to take account of her age. The extended cast also included Iris Russell playing Liz’s mother. Iris was a familiar face on British television having done many guest roles over the years and was a regular on the ATV hospital drama “Emergency Ward Ten.” Derek Benfield played Liz’s father. A playwright as well as an actor, Derek would go on to take co-starring roles in the BBC’s “The Brothers” and as Patricia Routledge’s long suffering husband in “Hetty Wainthropp Investigates”  Playing the children’s duplicitous protagonist, Commander Traynor, was the noted British theatre actor Denis Quilley. It was a challenging role as it involved playing the same character but at differing points in time. 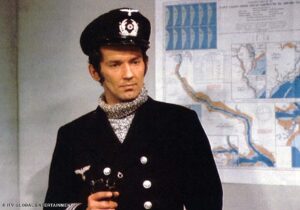 As the show went into production, bosses elected to extend its run to twelve episodes. This was done by allowing the children to travel into the future at the end of their WW2 jaunt and to a similar installation – this time at the South Pole.

The entire show including its location scenes were shot on videotape – a technique that involved taking cumbersome TV cameras to the time barrier itself, located at a disused wartime base near Cuffley in the south of England. The action recorded on location was then transmitted live back to the ATV studios in Elstree and recorded for editing into the final episodes.

It wasn’t long before it became apparent that the serial would be extended further and the twelve episodes became a full season of twenty-six. The third chapter of the serial became more ambitious in its content – dealing with a global catastrophe as the UK and the world literally burning up as a result of scientific progress going horribly wrong. As the scripting progressed, it became apparent that Bruce Stewart could no longer supply the conclusion to the series. He had, by his own admission, run out of ideas and the final seven episodes (including the climax to the third adventure) were passed onto Victor Pemberton – a former script-editor and producer on the BBC’s “Doctor Who”. It was Pemberton’s task to not only keep the serial going but to weave all of the many plot threads from the previous adventures into a satisfying conclusion. Victor’s scripts did this and also gave the series its most memorable plot twist.

Problems hit the studio recordings during the fourth and final adventure when a strike by ITV technicians resulted in union members refusing to work with the new color technology unless new contracts and conditions could be decided upon. The series had been taped in color up until that point. As such, episodes twenty-three through to twenty-five were transmitted in black and white. It was this situation that severely limited the sale of the series overseas. 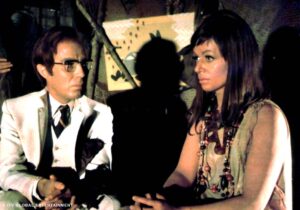 Although a second series was briefly considered, it was felt that the adventures of Liz and Simon had reached their natural conclusion in episode twenty-six. Spencer Banks returned to ATV and the “Timeslip” production team produced a new starring vehicle for him – an espionage adventure serial called “Tightrope” – the following year.

Nearly all of the colour videotapes of “Timeslip” were wiped some years later but one survived – episode twelve – the final episode of ‘The Time of the Ice Box’..

“Timeslip” is well remembered in the UK with a mixture of nostalgia and respect. In many ways, it was far ahead of its time. Not only did the scripts’ theories of time travel challenge the way its viewers saw the traditional SF concept of it, the show also took ideas and theories about the way scientific progress was heading and used them to create an almost prophetic view of the future. Amazingly for a children’s serial in 1970, it correctly identified the concerns over such subjects as cloning, global warming and genetic manipulation. Although some of the production can be seen as dated, it’s impossible not to watch the entire serial without thinking that the makers got so many things right about the future we live in today.