Buy the DVD on Amazon 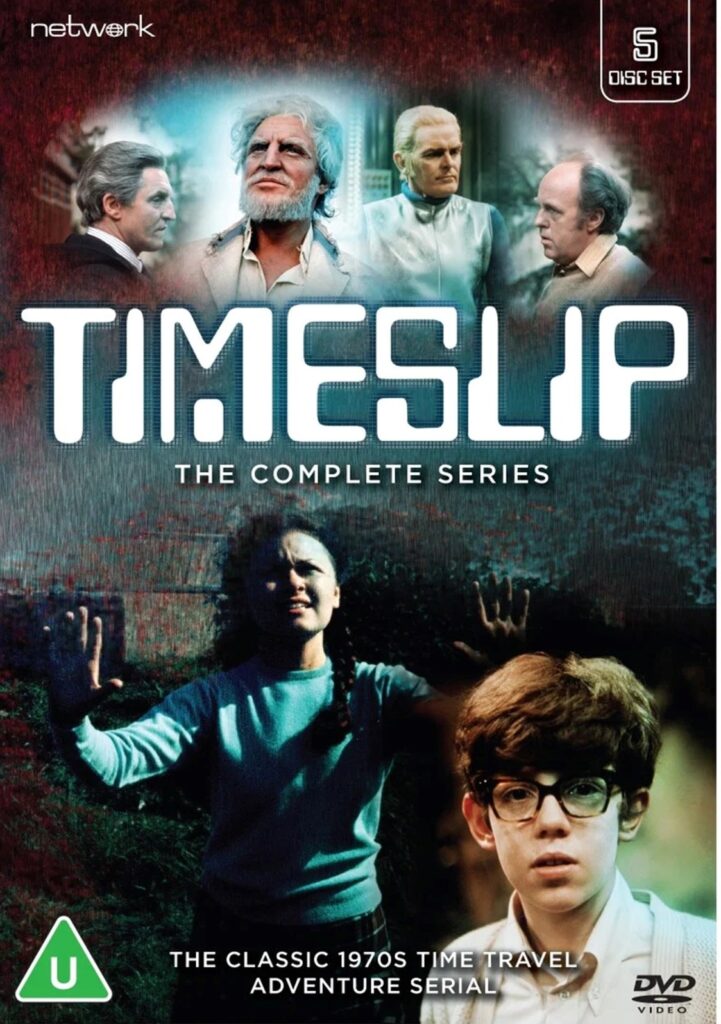 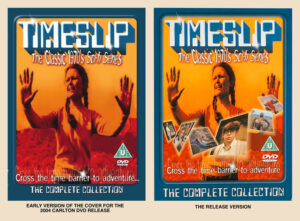 The team at the official Timeslip website were approached beforehand to help with gathering material for the extra features on the discs. The budget wasn’t high and these features would only be text based. Agreement was reached that any material on the website could be used by Carlton. The team also helped out by identifying some unlabelled photographs. Artist Richard Smith devised and created a map of St. Oswald showing the time barrier and the surrounding area. This was originally intended to be interactive but was eventually used as a plain graphic. In the end a short introductory piece by Andy Thompson as well as some character/actor bios were selected as text features together with a gallery composed of personal photos including some from Spencer Banks. Short synopses for each serial were also used for the packaging. These came from an episode guide on the website – though the one for ‘The Wrong End of Time’ is actually the first few sentences from the storyline for the serial’s episode one. 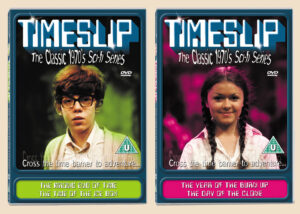 The series was released on Monday 19th July 2004. This was a four disc set and featured newly remastered episodes. Unlike the previous VHS release, Carlton elected to retain the commercial break bumpers AND the ITC International idents that were on the original film recordings. (These had been edited onto the film prints for international sales when they were originally made.) The original colour version of episode six of ‘The Time of the Ice Box’ was included in the set for the first time. Again, this retained the commercial break bumpers and ATV captions. The black and white film recording was not included.

The cover was primarily a turquoise and orange affair with the main image on the front being a black and white shot of Liz reaching for the time barrier. This was originally the only photo on the cover but the Timeslip website team pointed out that, by rights, Simon should be on the cover too. The design was eventually altered to include several colour photographs including a prominent one of Simon. The interior sleeves featured portraits of Simon and Liz across the two cases as well as some previously unseen stills on the inside covers.

With a couple of exceptions, the releases have seen some very positive reviews in the press and Spencer Banks gave a number of interviews to publicise the release. 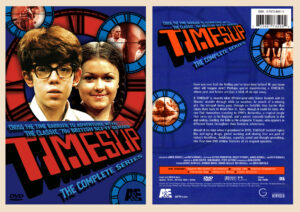 The year following the release of the Carlton DVD set, the US company A&E surprisingly decided to release the series in the United States despite the series never having been shown in North America. The company wanted material for the discs like Carlton and contacted both Steve Hardy & the Timeslip website team and content producer Jeff Smart (who had previously produced extra material for many of their cult TV releases). The extras were similar to the Carlton release and included text bi 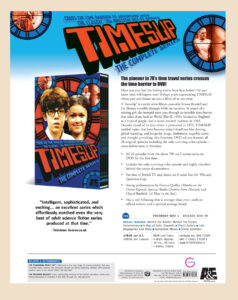 The major addition though was a short feature entitled ‘Beyond the Barrier’ interviewing Spencer, Cheryl and other members of the original production team. This was compiled from material that had already been shot for the then in-production ‘Behind the Barrier’ documentary. The feature was filmed by Jeff Smart and produced by Steve Hardy. It actually contained some material not used in the final full-length production.

Timeslip is currently available from NetworkDVD as a five disc set which includes the complete ‘Behind the Barrier’ documentary, a short mini-episode and a host of other text and visual extras. A full write-up about this set will be added to this site in due course.

The Timeslip DVD is now available, containing all the episodes of the classic ATV series.

The Network DVD version of Timeslip is now available on Amazon to buy new.

The A&E version is also available on Amazon.

Copies of all versions can be found on eBay.