Where is the Time Barrier?

The time barrier location site in Timeslip was an ideal spot to film scenes for the show. In the story, the invisible barrier led teenagers Liz and Simon from their time, when they could see the derelict naval base, to a period 30 years in the past when the base was operational in World War II. 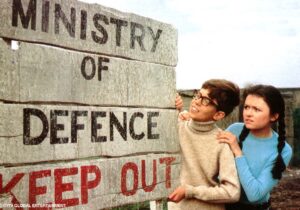 The production team found the location they needed – a piece of land in Hertfordshire containing a derelict military installation.

This was the heavy anti-aircraft (HAA) battery and barracks of Burnt Farm Camp, Broxbourne, staffed by about 400 personnel. The camp was one of 1,000 similar sites set up to protect the south and east coasts, large cities (London in this case) and industrial and military targets. The batteries tackled incoming German bomber planes. The big guns at Burnt Farm Camp, in place to shoot at high-flying bombers of Hitler’s air force (or Luftwaffe), were part of a base which was similar to so many others.

The gun site at Broxbourne is one of only 10 HAA sites to have survived in good condition. Its importance lies in the complexity and range of surviving gun emplacements and buildings. These include the operational area: octagonal and square gun emplacements; a well-preserved command post; a generator block; mobile radar equipment to seek out enemy planes,equipment enclosures and an on-site magazine (probably in the Nissen-type hut made from double-skinned corrugated iron sheeting) to store ammunition.

All these features were linked by track ways which are still on site.

The Anti-Aircraft Command base was in two parts. The domestic area to the north – alongside Silver Street – contained accommodation and administration buildings. The operational area lay to the south. 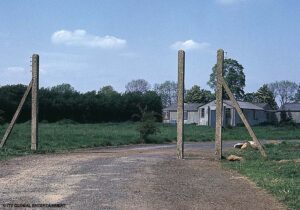 After the war, with military technology allowing more sophisticated defence systems, the 17-acre Burnt Farm Camp was returned to its original owners, the Theobald Estate.

In the early 1960s, the site was bought by local farmer Percy Needle for his son John and daughter Joan to run as a poultry farm over five acres of the area. They used the rest of the site as rough grazing for cattle and horses.

In 1970, John and his sister gave the Timeslip production team permission to shoot the time barrier scenes on the land. The last location shoots for the series appear to have been completed in September 1970.

More TV action followed in 1973 when part of an episode of the ITC thriller series The Protectors, starring Robert Vaughn, Nyree Dawn Porter and Tony Anholt, was filmed at Burnt Farm Camp. The episode, entitled Blockbuster, dealt with the theft of platinum which the Protectors trace to a disused military base – the old time barrier/naval base! Vaughn and Porter both visited the site for filming.

In the 1990s, the production crew of Inspector Morse used the site as a camp, though they filmed their scenes at another spot a couple of miles away.

John bought his sister Joan’s share in the land in 1997 and kept running the site for poultry until 2001. At this point, he sold the land to developer Lee Williamson who obtained planning permission for homes on the site. Persimmon Homes then built a private housing estate, The Paddocks, which now provides the only entrance to the historical site.

The Paddocks is built on the five-acre section of the land on which poultry was kept. To accommodate historical interests, the houses were built around the remains of the accommodation buildings, the original walls being encompassed in walls of the houses.

(This final photograph shows the time barrier today – or at least on 4th August 2020. Only two of the original concrete poles are still standing and the pathway leading to them is now overgrown to the point that it is almost impossible to reach them.)