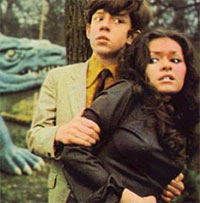 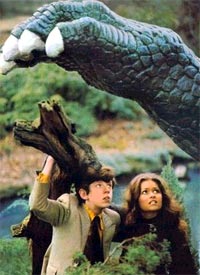 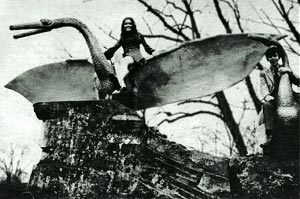 Amid the Monsters with Timeslip’s Liz and Simon

Suddenly, Liz shivered with fear as a pair of beady eyes settled ominously on her. The reptile launched itself from a rocky crag, sixty yards away. To Liz, the incessant flapping of leathery wings seemed almost unreal from her hiding place behind a dead tree.

Simon, in a slightly better position than his friend, bit his lip nervously. Apart from the fact that Liz had been his constant companion in many exciting adventures, she was the only one of them who could remember the entrance to… THE TIME BARRIER!

Then, another pterodactyle joined in the hunt. Both of them hovered above the helpless cowering girl, trying to pluck her into the air with their razor talons. Liz screamed, and in that fateful moment, Simon saw his chance.

The two creatures had begun fighting over their intended ‘meal’ and, in doing so, had overlooked their victim.

Simon rushed to Liz, dragging her into the shadow of a large rock. Speechless with fear, the girl pointed to a spot a few yards away. Then, the two of them ran a few paces, bent down on their knees and began to crawl forward. Almost instantly, they started to vanish… into the uncanny vortex of time. When or where they would come to rest they didn’t know – but they were unconcerned. They were time travellers – excitement and adventure were part of their destiny.

Yes, it is because of time travel, with its many perils, that Liz and Simon (Cheryl Burfield and Spencer Banks in real life) have become known to thousands of viewers for their parts in television’s immensely popular TIMESLIP series.

An amazing fact, as far as eighteen-year-old Cheryl is concerned, is that she never used to be a science fiction fan. As she explained, “It all seemed so way out”. She changed her mind when she was offered her first major acting role in Timeslip. The reason? “Timeslip never seemed as unreal as other science fiction,” Cheryl said. “I feel movement in time is almost possible.

Cheryl began her successful acting career when her father read an advertisement in the paper for photographic models. Cheryl went along and was a ‘natural’ at this sort of work. Consequently, her father decided that her talents could be best-exploited at stage school. Apart from her appearances in Timeslip, Cheryl has also worked with such people as Dickie Henderson and Terry Scott. And, like most go ahead girls, Cheryl has an ambition – to become a really good actress and work in Australia, where she used to live. Cheryl has the usual likes and dislikes of a girl her age. She wears all the up-to-date clothes, including hot pants, midis and maxis, and, as do most females, she prefers to watch romantic films at the cinema. Her favourite hobby, as regular LOOK-IN readers will know, is collecting dolls from different countries. One of her best friends is her dog, Sacha – a white west highland terrier.

And what about Spencer? Well, he made his first stage appearance at School – Barr Beacon Comprehensive in Birmingham, where he played in ‘The Wizard of Oz’. Spencer’s headmaster was so impressed that he advised him to think seriously of becoming a full-time actor.

Spencer lives at home in Birmingham with his parents and younger brother, Timothy who is six. Spencer says of his brother, “Tim can’t quite grasp the fact that I can be on television and sitting beside him at home at the same time!

Spencer’s interests include birdwatching and photography and, like Cheryl, he would like to work abroad. His ideal ‘location’ would be California in America.

But no matter where these two talented youngsters go, you can guarantee one thing. We’ll be seeing a lot more of them in the future!