I was approached in the late 60s by Renee Godard, at that time a children’s producer at ATV, and asked to think about something that could challenge Doctor Who over on the BBC. I had recently had some success with one-shot sci-fi plays, which made me a likely prospect. There was space for a contained six-parter. 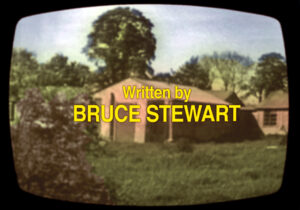 Ruth Boswell was to be the editor. We entered into talks immediately, and this basic notion emerged about two children who can break through the time barrier. Ruth and I were clear from the outset that we did not want wild fantasy – Doctor Who was getting wackier and wackier all the time just then – but something more ‘tied in’ to everyday life. We sought family viewing, parents watching with their offspring. (This may have been something of a new idea at the time : children’s programmes classically were I think designed to get kids out of their parents’ hair.) Thus the idea developed of a boy and a girl who were very different from each other and squabbled a bit, but together were able to ‘stumble into’ the mystery of time travel.

I had about that time, as a result of having worked on a wartime resistance series, become interested in a tale, oft retold, of a German expeditionary force which was alleged to have landed somewhere in Britain circa 1940. There was no telling if this was the truth (suppressed for security reasons) or just a legend. Nor was it possible to pinpoint where it was actually supposed to have happened – The South Coast? Norfolk? You could take your pick. No one knew, least of all those (there were many of them) who had a cousin or uncle who just happened to have been on coastal patrol on the night when… A later Michael Caine film attempted to rationalize this persistent myth into an attempt to assassinate Churchill in The Eagle has Landed. The legend fascinated me because I am a New Zealander, and my war (I was only in the last year or so of it) had been in the Pacific. But I was a child of the old Empire, and thus caught up in the romance of the ‘island fortress’.

It consequently seemed to me there was an excellent tale to be told about two children able to move back into the wartime world, and return with fragmentary reports of what had actually happened there. 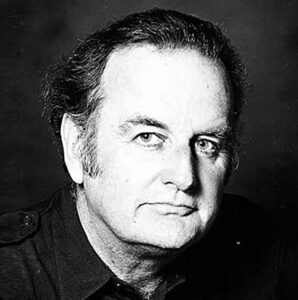 Because we wished to be as realistic as possible, this committed us to serious consideration of time-travel, Could such a thing actually occur, and under what circumstances ? We sought scientific advice, and Geoffrey Hoyle – the son of the famous astronomer Fred Hoyle, was brought in. I am not sure that we gained a lot from his ‘expert’ counsel, but I was impressed by his notion (derived from his Dad? Who can tell?) that adolescents may be open to ‘energy’ still surging around from the past. This would provide among other things an explanation for ghosts – long-dead persons ‘haunting’ a particular place. Something similar was already accepted in parapsychology. Poltergeist phenomena seemed almost invariably associated with the presence of a 12 or 13 year old.

The six-parter thus developed in my mind as a sort of rites-of-passage story (long before such things were usual) which would come full circle when the children returned from time-travel having become young adults, their abilities thus shriveled. But when the powers that be decided to proceed with another six episodes, that emphasis had to be abandoned and we ‘segued’ our way into a new story, about the children visiting the future.

This was a much more problematical venture in ‘realistic’ terms, so the series came off the philosophical speculation and started to concentrate on ecological problems. This was a new concern at the time, and The Time of the Ice Box and The Year of the Burn-up were first in many ways the first projections in the field.

I wrote the first 18 scripts, when other work then forced me to give up Timeslip, and the final six episodes were written by Victor Pemberton.

There was input throughout from the whole team. Important input could sometimes come from those not directly involved. For example, in the initial story we had difficulty about what Hitchcock would have called ‘The McGuffin’ – the motivation for the action. Why was the German force landing in wartime England and occupying a naval base? If they were after some new and vital technology what on earth could it be?

It was Ruth’s late husband James who came up with the idea of a laser beam. The strange thing is that few of us then had even heard of lasers, and we certainly saw no military or strategic importance in them. I remember John Cooper, the producer, being dubious about it, but saying that in as much as we were ‘projecting’, it didn’t matter if we were wrong. Even the crafty Germans could have fixated on something which turned out to be useless.

Another development Timeslip ‘accidentally’ promoted was cloning. I cannot remember actually where the idea came from, but certainly everybody involved, including Geoffrey Hoyle, thought it a fairly wild projection. It was considered about as likely in the 60s/70s as a heart transplant would have been in the 40s. 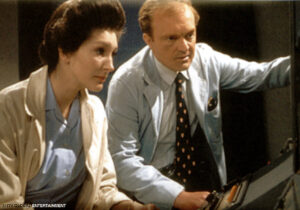 John Cooper was an excellent producer, who never interfered with what Ruth and I were trying to do, nor tried to mess with the scripts once I had written them and Ruth had passed them. Altogether the team was one of the best I have ever worked with, with no prima donnas, and a simple concentration on the job in hand.

The title of the series was a difficulty for a while. I had called my initial storyline The Phase Children, which wasn’t much cop, but echoed our notion of time travel being like going into or through ‘phase’. Ruth pondered Kronos, but that seemed a bit too classical for secondary modern kids. Then somebody somewhere in ATV came up with Timeslip. I was under the impression that this was actually the title of an old film (no copyright in titles), but I have since been able to find no such screenplay listed in Halliwell*. So perhaps it was an inspired flash of originality, for it fitted the series as a whole perfectly.