When the ITV listings magazine TV Times launched its junior version called “Look-in” in January 1971, it created a comic that was to become as much a part of seventies pop culture as space hoppers, chopper bikes and space dust. “Look-in” featured an eclectic mix of text articles on pop and TV stars of the time, posters, and comic strips based on current ITV favourites that over the years included the likes of Benny Hill, Space: 1999, Mind Your Language, The A-Team, Enid Blyton’s Famous Five, How The West Was Won, The Bionic Woman, Worzel Gummidge, Sapphire & Steel and The Tomorrow People.

As well as including the first part of a cut-out model of the Magpie TV studio, issue one (dated the week ending January 9 1971) featured a comic strip devoted to the further adventures of Liz and Simon beyond the television episodes of Timeslip.

The stories were written, more often than not, by Angus P. Allan and illustrated at first by Michael Noble. Both had been stalwarts of the legendary TV Century 21 comic of the sixties. TV Century 21 was devoted to the TV shows of Gerry & Sylvia Anderson and included strip versions of their many supermarionation productions.

It was edited by Alan Fennell who went to become the founding editor of “Look-in”.

The Timeslip comic strip began in issue 1.1. It was spread across the centre pages and in glorious vivid colour. In it, Liz and Simon find themselves exiting the time barrier into a strange and apparently prehistoric jungle whilst Liz’s parents (and a somewhat more benign Commander Traynor than appeared in the TV series) worried about them back in present day St. Oswald. The likeness of Cheryl Burfield and Spencer Banks were excellent. Noble used stills of the two actors taken on the sets of The Time of the Ice Box and hence the two characters retained the costumes from that serial (Simon, his off white jumper and Liz, her brown cardigan.) for the duration of the strip’s run. The prehistoric world was revealed to be a future version of Earth and the two teenagers eventually found themselves tumbling to a new adventure halfway through episode five. Noble continued to handle the art chores for the first twenty-six instalments, all of which remained in colour.

In issue 1.27, the strip shifted to make way for an adaptation of Follyfoot – a filmed series from Yorkshire Television about a riding stables and the various young characters that inhabited it. Noble left Timeslip to draw this, leaving the strip to less memorable artists. It was also now in grey tone.

As the strip continued into 1972, it became more and more divorced from the original television series which had ended nearly a year previously. No longer was the time barrier located at St. Oswald but now it had a bizarre habit of scooping up Liz and Simon when they least expected it and allowing them to travel not just in time but into outer space and other planets. A later story had the teenagers meet the Victorian enigma, Spring-heeled Jack.

The strip ended in issue 2.50 with the conclusion of an off-the-wall two part adventure which even dispensed with the time barrier itself and saw Liz and Simon transported to a surreal Earth courtesy of a mysterious UFO.

A comic strip also appeared in the 1972 “Look-in” annual and saw the two children catapulted by the time barrier to a future world dominated by a bald headed super villain known only as “The Botanist” (!) Like the strip in the weekly comic, the annual story 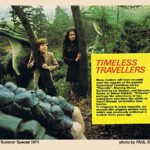 suggested that the time barrier and the Ministry field were located near the sea on the Cornish coast.

In 1974, to coincide with the TV serial’s re-run on the ITV network, “Look-in” reprinted ‘The Maid of Falmouth’ colour Timeslip strip in black and white in its Summer Special.

Angus P Allan was TV Century 21’s story editor. He also wrote several of the comic strips and adapted Gerry & Sylvia Anderson’s script for the movie “Thunderbirds Are Go!” into a novel for Armada Books. Later on during the mid-seventies, he contributed stories and text to four Space: 1999 annuals for the children’s book publisher World Distributors.

Michael Noble had drawn Fireball XL5, Zero X and Captain Scarlet & the Mysterons for TV Century 21. His dynamic, colourful, action-orientated style coupled with his ability to capture facial likenesses and movement well made him an ideal choice for the “Look-in” stable of comic strips. After Timeslip, he virtually remained with the comic until its demise in the eighties applying his illustrative skills to such diverse TV series as The Adventures of Black Beauty, The Man from Atlantis and Enid Blyton’s Famous Five. He came out of retirement to provide a selection of posters for the revived Thunderbirds comics being produced by Fleetway and edited by Fennell, during the early nineties.

Other Look-In Features and Appearances

Throughout the course of (and a little beyond) Timeslip’s television run, “Look-in” provided the show with a number of specially commissioned publicity pieces through articles and posters. 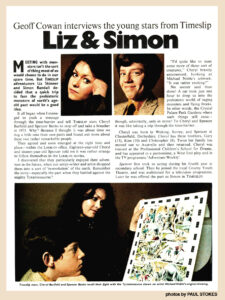 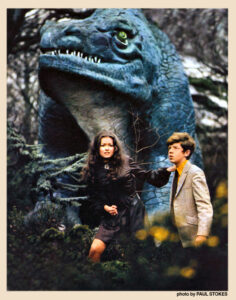 heryl Burfield and Spencer Banks posing for photographs amongst the full size fibreglass dinosaurs of Crystal Palace. Both were out of their television costumes and wearing more “with it” gear. Spencer (minus his prop glasses) wore a cream jacket, yellow & orange patterned shirt and dark brown tie whilst Cheryl (minus pigtails!) wore a dark top with a lighter quarter length skirt. The accompanying interview revealed little and the piece was re-written for the 1971 “Look-in” annual using different photos from the same shoot together with a half page publicity still from the original series. 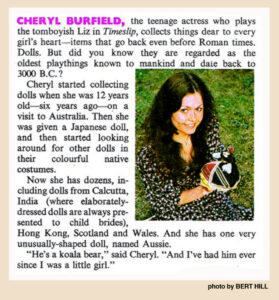 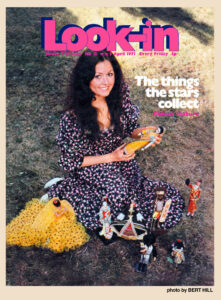 Issue 1.13 saw Cheryl Burfield as the cover girl. She was interviewed about her collection of international dolls in a feature about celebrities and their hobbies. The article also revealed that Hughie Green had a model railway set-up in his London flat “…with £600 worth of rolling stock.” Deryck Guyler (Potter in Please Sir!) collected and painted metal soldiers. Ronnie Barker was a ‘deltiologist’ – a collector of postcards (though the article failed to mention that the postcards were of the saucy seaside variety.) And Anita Harris collected teddy bears. She had ten… though one was an elephant! 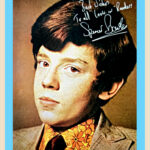 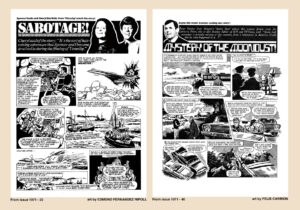 Shortly into its first year, “Look-in” began a series of short comic strips under the umbrella title “Celebrity Choice”. These were an anthology of non-TV based strips allegedly introduced by various guest celebrities (or rather their photographic likenesses and a speech bubble!). Cheryl and Spencer took their turn with a three-part strip story entitled Sabotage! running from issue 1.35 to 1.37. The story had no TV connection and  had a similar plot to the Thunderbirds episode ‘Operation Crashdive’ in which a jet airliner crashes into the sea and needs to be raised to the surface. Neither Spenc 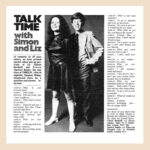 er nor Cheryl have any recollection of the strip let alone being asked for permission to use their likenesses! 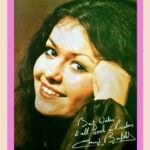 A few issues later, Peter Fairley, in his day job as ITN Science Correspondent, introduced a four-part SF tale entitled ‘Mystery of the Moondust!’ from issue 1.40 to 1.43.

Two issues featured artwork promoting the comic strip on the cover, both during the black and white era. Issue 2.11 saw Mike Noble briefly return for a striking piece of art as Liz a 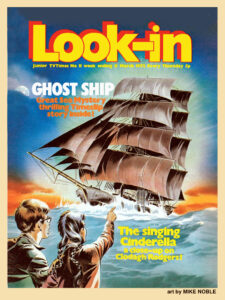 nd Simon are confronted by a ‘Ghost Ship’. 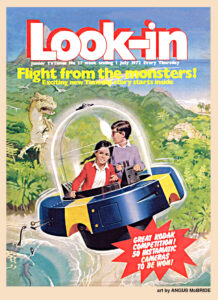 Issue 2.27 had the two time travellers at the controls of a futuristic flying vehicle escaping dinosaurs on the cover. The art was by Angus McBride.

Issue 2.6 featured an artwork cover of Spencer Banks in his role as Martin in “Tightrope” with the background depicting Simon going through the time barrier! Inside the issue Spencer was interviewed on both his new series and his memories of ‘Timeslip’ with the actor hinting that he

was ready for a second series of the latter if the makers wanted to do one. 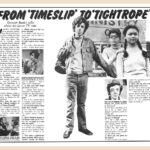 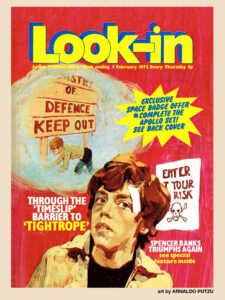 er along with other youngsters including Mark Lester, Jack Wild and The Flaxton Boys. The article was illustrated with a previously unseen picture from the pair’s earlier Look-in photoshoot.

Grateful assistance from Richard Smith and John Stewart at lookoutchecklist.weebly.com