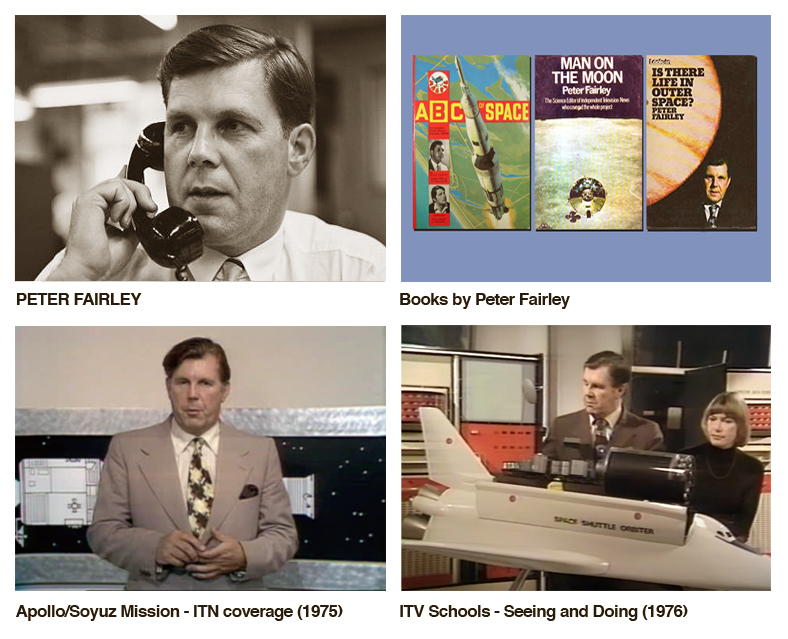 During the late sixties and seventies, Peter was Independent Television News’ science correspondent. Space exploration with the moon landings during this period resulted with him becoming synonymous with ITN’s extensive live coverage of the Apollo missions. He was also a familiar face to ITV’s younger viewers with regular appearances on Magpie and other children’s programmes which, in turn, resulted in his writing of several factual books including Magpie’s ABC of Space (Independent Television Publications: 1969) and Is There Life in Outer Space? (Look-in Books: 197?) He penned a regular science column in the early years of the junior TV Times Look-in.

For Timeslip, Fairley gave brief on-screen introductions to the first two Timeslip adventures. The following are transcripts of them. In each, Fairley stood on a darkened set and addressed the camera directly. In the case of The Time of the Ice Box, he was helped out by a half blown-up balloon to illustrate the time bubble itself. Both intros occurred before the opening title sequence.

Episode One – The Wrong End of Time

“Have you ever had the feeling that you’ve been here before, and yet everyone tells you that you can’t have been? Or perhaps you’ve felt “this has all happened to me before, and I know what’s going to happen next”? Well, a lot of people do get these sensations, and nobody can yet explain them. They seem, somehow, to involve the mind travelling forwards or backwards in time. And that’s what this new series Timeslip is all about: children projecting themselves forwards and backwards in time. It’s fiction, of course, but it’s very close to a new theory scientists are now working on to explain the universe, and time. Today’s science fiction so often becomes tomorrow’s science fact…”

Episode Seven – The Time of the Ice Box

“What is a ‘time bubble’? Well, you can’t see it of course but it might help you to visualise it to think of it as a balloon. Some scientists are now working on the theory that wherever you are, YOU are at the very centre of the universe, and that the universe is really one giant sphere, and that it has an edge to it. Information about events is flashing constantly back and forth between you and the edge of that sphere, so that at any given moment, you are mixed up in the past, the present and the future, virtually all at the same moment. But supposing some little patch of that information, some little patch of history, gets slowed down, and instead of flashing backwards and forwards it floats, gently, as if in a bubble. It might have collided with some solid object, and got temporarily halted in its tracks. Or, it might be slowed down by some mysterious force. Or the edge of the universe might have a hole in it. Well, suppose somehow that you could get into that time bubble, that bubble of history, and travel with it. Then you could travel backwards and forwards in time at will…”O